If arthroscopy can lead to acceleration of your hip problems then it is even more important that you right from the start are in full agreement with the planned procedure. If you already have this operation behind you and now have to admit that new problems arose then you are also advised to read on. 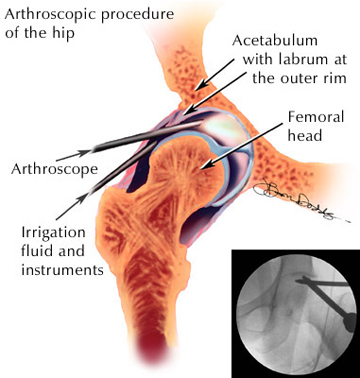 It varies what is performed exactly during an arthroscopy or minimal invasive surgery in a hip joint but please convince yourself in advance that you know exactly what will be performed and that it carries your approval. Some of the possible procedures are: labral repair, debridement, bumpectomy and resection of the anterior rim. The orthopedic surgeon shall together with you look ahead and be able to give you a reasonable guaranty that the procedure will not worsen the basis for possible later application of a hip resurfacing prosthesis! My experience through all those that contacted me is however: arthroscopy can lead to acceleration of your hip problems in many cases.
Easiest and most simple would be an investigative arthroscopy with as only aim to find the cause for some problem that other examination methods have not been able to pinpoint. An internal examination through a small opening causes the least damages but there are still lower risks for complications like an infection, trauma from traction (pulling of the leg to separate the joint a little under the procedure) and the so-called ”Portal Syndrome”.

A completely new situation exists when the arthroscopic procedure is even intended to directly tackle any findings. This can involve removal of cartilage or bone tissue with for example a form of FAI (Femoro-Acetabular Impingement) or removal of other undesirable bone formations that are thought to limit the hip’s normal mobility. See the image for the different forms of impingement: 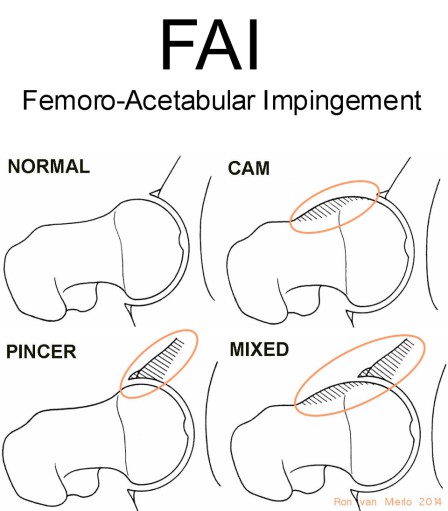 Arthroscopy has become popular but what is not covered well enough in the information given by surgeons is that changes in the hip’s geometry when cartilage or bone is removed also can damage and cause new problems. Each minute change in the joint’s bearing surfaces disturbs the previous sensitive balance and so much that it often accelerates the cartilage wear. If you didn’t already have osteoarthritis it can very well be initiated by the scraping and cutting of the hip’s cartilage. My experience is that new pain and problems already re-appear 6-12 month later and more intense than before the arthroscopy. The new problems can sometimes be caused by removal of parts of the socket’s rim (acetabulum) that really were there for proper support of the femoral head and through the dish shape also used to guarantee that the lubricating synovial fluid could retain sufficient amount of the fluid to prevent friction and wear. When the hip’s bearing surface decreases and synovial fluid is allowed to easier slip out of the socket the friction and wear will automatically increase. The images that follow show this with a young woman. 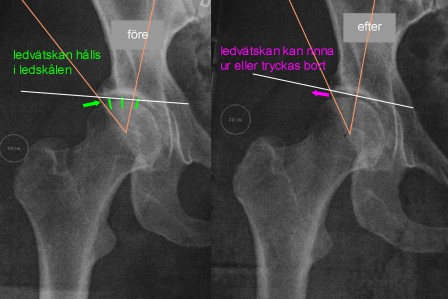 If all the surgeons that perform arthroscopies on hips also had been hip resurfacing specialists then we patients would have the guarantee that under the procedure noexcessive tissue was removed and everything else carefully spared. Sadly the situation is the exact opposite with no Swedish surgeons that perform hip resurfacing and under them a shortsightedness or blunt refusal to count with the possibility that patients possibly might want a hip resurfacing in the future. The surgeon does hereby incorrectly take himself the right to decide for the patient, who most of the time is completely unaware of the implications for the future, not so nice!!

Real hip resurfacing specialists do not use arthroscopy on the hip routinely but only in rare situations because they as no other know how little the benefit and how large the damages can be. Experience shows that a hip after arthroscopy (with removal of cartilage or bone tissue) often impairs or prevents correct placement of an acetabular cup with a future prosthesis operation and regardless whether this would be a standard THA (Total Hip Arthroplasty) or a hip resurfacing prosthesis. 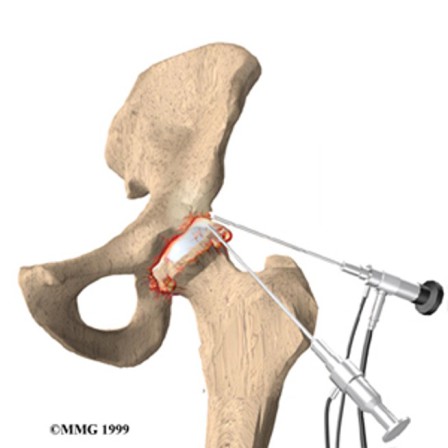 That arthroscopy can lead to acceleration of your hip problems and with reasonable probability do more damage than good on patients with osteo-arthritis is also seen by Swedish surgeons, see: http://www.hoftartroskopisweden.se/113354564

A foreign surgeon also questions arthroscopy and whether if the procedure really agrees with the oath that each doctor once upon a time has given: “…not to cause any harm…”. He also repeats the principle that he was taught “never to operate inside an adult’s hip joint unless you are going to replace it”, see the article: Does hip arthroscopy work?

My free translation of the previous is that surgeons and patients should realize that arthroscopy disturbs the hip’s sensitive balance and with reasonable probability can lead to yet another operation but now for the placement of a prosthesis.
If patients had been made aware of this right from the start they might well have considered if immediate placement of a hip resurfacing hadn’t been better and taken care of the problem once and for all!

Not all the noted complications occur as often but they are many:

Arthroscopy is supposed to be minimally invasive but in the real world with predominantly complications the minimal looses its meaning while consequences of the procedure will take over.

My recommendation:
Whatever your hip problem is, please contact me first and after all this is free of charge and quick. Independent surgeons in my network will be asked for their opinion. This second opinion can very well give you new insights. And remember: arthroscopy can lead to acceleration of your hip problems !