Not everyone who receives a hip prosthesis needs to know every small detail of his or her prosthesis but the cup that commonly is placed in the acetabulum actually forms half of the prosthesis and does therefore deserve a little more of attention than we normally give it.

Especially during the planning for a type of prosthesis and before final decisions are made we should be much more aware of what exactly we are getting and what the implications are. Only then can we ourselves influence the selection that the surgeon may have in mind for us, his choice in this may not necessarily have to be what we would have selected if we were fully aware of all the implications. Below follow 6 examples of possible combinations with different materials and to certain extend different sizes. The fifth alternative starts to near the hip resurfacing and is preferred from an anatomical point of view over the alternatives one to four. Hip resurfacing (alternative six) is in turn preferred over alternative five because the long intruding shaft and removal of the femoral neck with alternative 5 is avoided with alternative 6.

It is very seldom that only one type of prosthesis and matching acetabular cup suits a particular situation, often there are several choices possible. You as patient can take advantage of a little study in the subject which will then allow the selection of a prosthesis that you can truly back after having learned about some of the differences. Unfortunately I know many people that just left the decision up to the surgeon and never gave themselves a chance to understand the differences of the prostheses and now looking back have to admit that they would have gone for a hip resurfacing in stead of the conventional hip prosthesis that the orthopedic surgeon selected. Often the surgeon had not taken the effort to give full information on all that was available and possible! In many instances it can seen on the old x-rays that these people sent me that hip resurfacing would have suited their situations perfectly!

But now back to the socket or acetabulum and in it an acetabular cup:

When a prosthesis is required the layer of cartilage in your own natural socket or acetabulum is commonly worn so much by the particular disease that bone on bone contact between the socket and the femoral head in increasing frequency occurs, in turn leading to more serious damage and pain. The cartilage will in that situation need a replacement, for instance in the form of an artificial acetabular cup. The cup is selected so that it exactly matches the other half of the prosthesis in the thighbone or femur, or on the femoral neck in case of resurfacing. The acetabular cup itself or its insert can be made of plastic, ceramics, a combination of plastic and ceramic or lastly metal as with hip resurfacing. They all have their own advantages and disadvantages, not just because of the choice of material but also the sizes that the femoral head and cups will get in the different configurations. But only in case of hip resurfacing will the surgeon be able to select the size that for 100% agrees with the patient’s own anatomical hip. It should be obvious that is is best if the new femoral head and the acetabular cup are not smaller than found in the person’s natural hip and that really matches the anatomy of the person. Unfortunately many surgeons have through the years found it acceptable to automatically give all their patients the standard 28mm head and cup, regardless of their patients completely incompatible anatomical properties. This small size head caused apart from high wear also many very painful dislocations (luxations). In response to these complications the surgeons had to advise their patients to abstain from many activities that otherwise were really perfectly normal for the patients. Isn’t this a twisted way to treat patients if something much better, the hip resurfacing, is freely available?!

How the acetabular cup is attached in the pelvis

An artificial cup of metal can be fitted in the acetabulum as a press-fit by under-reaming the acetabulum with a reamer that is one or two millimeters smaller than the metal cup. The cup is then hammered in place in the acetabulum with special instruments. In the months that follow the pelvis bone tissue will grow into the porous surface on the back of the cup and complete the attachment (the material of the cup’s porous coating is usually hydroxyapatite).

In stead of a press-fit the cup can also be manufactured for use with bone cement. In that case the cup is not hammered in place and does not have a coat of hydroxyapatite either but is fitted with a layer of cement. There are orthopedic surgeons that prefer the one method over the other but with hip resurfacing the cup always of the press-fit kind.

For special situations like for example hip dysplasia a special acetabular cup can be used that is fitted with two lugs that allow the attachment of the cup through by use of screws. A cup like that is therefore called a dysplasia cup. The dysplasia cup shown on the next picture belongs to the BHR and BMHR prostheses. 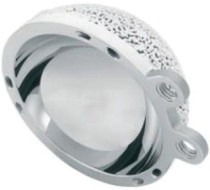 How the cup is angled is very important, especially in hip resurfacing!

Acetabular Cup Position: The Imperative of Getting It Right

The acetabular cup’s angles in the pelvis

When we receive a hip prosthesis of any kind but other than a so called hemi prosthesis, it will always be fitted together with a matching acetabular cup. Regardless whether a THR or hip resurfacing is placed, the surgeons should nowadays be well aware that the angles under which the acetabular cup is fitted has major implications for the performance and life of the joint.

For the life span and wear of the cup the inclination angle or abduction angle is the most important factor. This is in other words how much the opening of the cup is tilted upward from a horizontal line. But even the anteversion angle is of importance, in other words how much the cup’s opening is rotated forward. This angle also influences the wear and life span of the device but to a lesser degree than the inclination angle, but still…..

The inclination angle can relatively easy be seen and accurately measured on x-rays but this is much more difficult with the anteversion angle. When anteversion is present it will show itself on the AP pelvis x-rays as an ellipsis and a conversion from an ellipsis to an angle in degrees is tricky. An important and often unknown factor is what the position and direction of the camera was during the examination. If this was right in the center between the two hips then it will give a false angle indication for both cups. If the camera on the other hand was positioned right in front (when standing) or over one of the hips (if lying down) then the most accurate condition exists for assessment of the anteversion angle using x-ray.

There are many different studies and research articles from orthopedic surgeons and others on measurements, calculations and formulas that provide a way to convert the ellipsis that the cup’s edge forms on x-rays into an angle, but all methods have their own faults. The amount of the faults are in my opinion not of great importance for us patients because we only in round about terms would like to know if our cup lies within the generally accepted values.

Without applying any formula we can already determine from an x-ray if an acetabular cup has no or very little anteversion. In stead of a real ellipsis the cup’s edge will then show itself as a straight line.
I’ll see if I can list some articles on this subject here on my website.

A prosthesis with an acetabular cup that has little or no anteversion har its edge sticking out forward which can cause impingement with the muscle groups psoas major and iliacus and in turn cause noises, inflammation and pain. The anatomy of the pelvis differs from person to person and between the sexes, just as our natural acetabulae can face in slightly different directions. If our natural acetabulae do not deviate too much from the ideal angles a surgeon will generally follow this direction when he places an acetabular cup but sometimes a real correction and new angles are required. It is up to the surgeon to decide in each individual situation which direction or angles are regarded most neutral.

Articles from research that include measurements of the acetabular anteversion angles: